Prince Albert is a delightful historic village at the foot of the Swartberg Pass, which has been declared a World Heritage site. It forms part of the Karoo which is a semi desert area taking up a large part of central South Africa. Although the region is known for periodic devastating drought, the town escapes this as it is blessed with perennial water from the Swartberg (Black Mountain) and the village still uses the age-old water furrow system along its streets to irrigate gardens and small town farms.

Prince Albert enjoys a superb climate, with a high sunshine index, clear air and a night sky visibility that is spectacular. The village boasts many beautifully preserved Cape Dutch, Karoo Victorian and Georgian buildings – 13 of which are National Monuments. Its produce is famous, and includes sun-ripened fresh and dried fruit, especially figs and apricots. Karoo lamb, olives, olive oil and cheese are sought-after local delicacies. In the Prince Albert Valley to the south, farmers have restored vineyards last cultivated in the 19th century, and are already producing excellent wines. 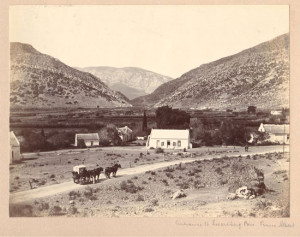 The village of Prince Albert began with the establishment of the farm Queekvalleij owned by the de Beers in 1762.  Other farms sprung up due to the fertile area by 1842 a community and NG church were established.

The Swartberg Pass built 1881 over two years and Die Hel are worth a day trip by cycle, walking or vehicle. The pass itself is a mecca for cyclists who pit themselves against the seemingly neverending hairpin bends. Die Hel is a secret haven for the growing sport of Trail running.